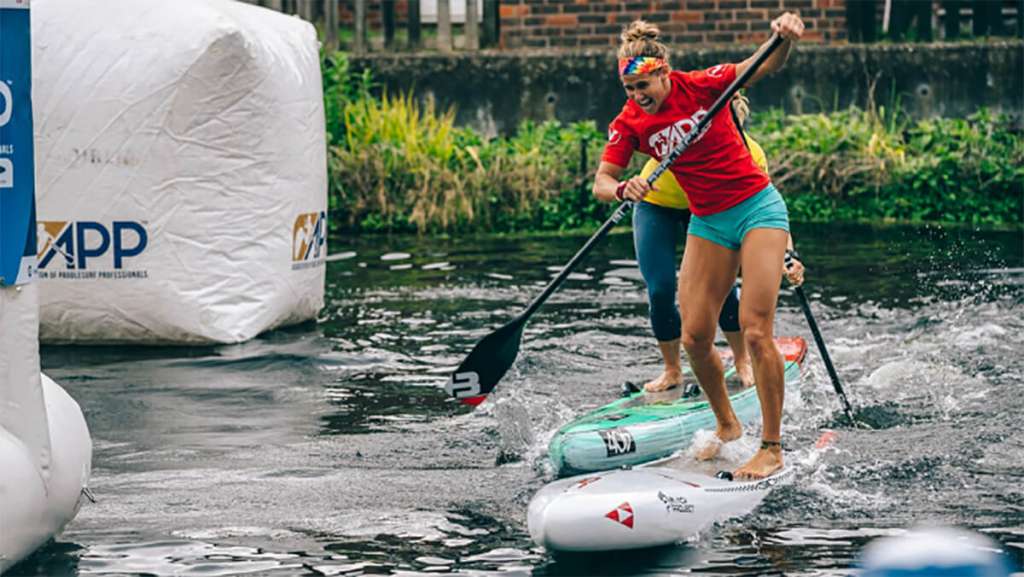 Winning the coveted award from the Association of Paddlesurf Professionals (APP) required Seychelle, 32, to prevail in sprint and distance races in London, New York City and Osaka, Japan, to get to Paris.

“I was nervous. I was leading in the points, but my win was not a done deal,” recounts Webster, tanned and lithe with the sun-kissed hair of a beach dweller. “One fumble in Paris and it could have been screwed up.”

The sprint race took place in a 70-meter pool in which competitors accelerated their 14-foot racing paddleboards, made sharp turns, accelerated and turned again. With epic skill and speed, she won by a half a board’s length.

The next day almost 1,000 people participated in the long-distance race on the Seine River. Webster had already accrued enough points to win the championship, so she enjoyed the race and came in second. “Everybody was cheering when I received the giant trophy. I had a feeling of ecstatic happiness. Later, when I was in my hotel room by myself, I cried, thinking about what I’d done.”

Ten months earlier, Webster wasn’t sure she’d ever paddle again. On Feb. 13, she awoke to intense pain shooting down the left side of her body and numbness in her left hand. The soft discs between her neck vertebrate had ruptured, causing excruciating nerve damage.

“As an endurance athlete, I have a high pain tolerance and I had learned to push through pain,” she says, but this pain was much more intense than any she’d ever experienced.

“I was really scared. I had a magnetic resonance imaging (MRI) scan and talked to half a dozen doctors. Every single physician told me that I needed surgery. They wanted to fuse three of my vertebrate together to help deal with the nerve damage caused by disc herniation.”

She seriously considered surgery because it sounded like the fastest way to get back to paddling. But she had studied alternative medicine and, with the enthusiastic support of her online paddling community, she chose a less invasive, more holistic approach. She meditated and used plant-based medicines like turmeric, cumin and Frankincense, also called Boswellia, to reduce the inflammation. She used cannabis to deal with the pain and began doing physical therapy and working with a NeuroKinetic therapist to identify and correct the root cause of her dysfunctional motor pattern.

“I had to retrain my body,” she said. “The lats (latissimus dorsi) in my back weren’t doing their job. My triceps muscles had disappeared entirely.”

In April, she slowly started padding again. “I began to see the injury as an opportunity, not a setback,” Webster said. “I looked at my paddling technique and retrained myself to use my legs a lot more.”

In May, she traveled to London for the first race of the world tour. “The distance race started under London’s Tower Bridge on the Thames River and continued seven miles to Putney.“I couldn’t believe I’d won both the sprint and distance competition because I’d only been training at one-third to one-half of my normal intensity. But because I was paddling differently, I’d gotten faster.”

She raced in New York City in early September. The distance race circled the Statue of Liberty and the sprint races took place near Long Island. She won the sprint race, which started on Long Beach. Learning how to paddle in the surf was the main reason Seychelle moved to Melbourne Beach almost three years ago. “It’s challenging. You have to run into the surf and jump on your board so you have a flying start.”

She took second place in the overall event. At the end of September, she competed in Osaka. Her main competitor, April Zilg, won the sprint race and Seychelle took the distance race. Then came Paris.

Webster has already set her sights on next year’s championship. “From the moment I learned how to stand up on a paddle raceboard five years ago, I knew that I loved the sport. I knew I was going to be really good at it but I didn’t know if I would be the best,” Webster said. “I love competing.”

When she’s not competing, Webster works out nine times a week – six cardio or paddling and three strength building. She rests one day a week. Overtraining contributed to her injury, so she listens to her body and doesn’t necessarily complete every workout.

“I eat when I’m hungry and stop when I’m full. I don’t count calories though I did for a long time,” she said. “What’s more important than calories are macro-nutrients. Getting the right balance of protein, carbohydrates and fats.”

Her next competition is in the end of April so she will start a strict training program again in March.

Webster loves living in Melbourne Beach with her firefighter-paramedic husband Will Webster, who is almost as fit as she is. She also loves helping people become better paddlers and getting more people into paddling. “Being a professional athlete, people look up to me. I try to use that to make the world a better place,” she said.